A very different film from Corman’s crowd-pleasing Poe adaptations, The Intruder is a sharp dissection of racism in the American South at the time of desegregation. Political commentary disguised as exploitation film, it plays very differently to a modern audience – particularly in Britain – than it would have in 1962, when it barely found an audience at all. 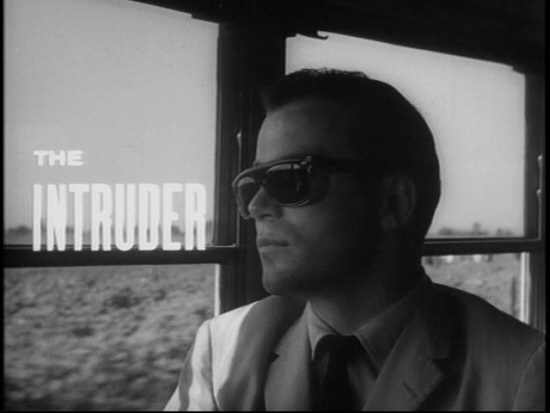 William Shatner (four years before Trek) plays Adam Cramer, a slick bastard in a white suit who arrives in the small town of Caxton on the eve of integration, charming the women and stirring up racial hatred. As the hatred spirals into violence, Cramer finds himself loosing control of the situation he created, digging deeper holes to extricate himself and eventually exposed by the man he cuckolded.

Corman’s characteristic wit is there in the sharp portraits of small-town stereotypes, and while Cramer’s firebrand speeches seem unsubtle to the modern ear (particularly coupled to the beginnings of those unique Shatner cadences), they’re really not so far from what was really going on in America – and the hatred he stirs up is still disturbingly present, if not so visible. It’s telling that Corman ends the film, not with redemptive violence visited on the instigator, but the mob dispersing to think on their behaviour or to try to forget it, and Cramer humiliated but free to leave – this lesson may be learnt, but very likely will not be passed on.

(Interesting, also, that actor Frank Maxwell, who plays the town’s newspaperman (the first character to mistrust Cramer), was apparently blacklisted during the McCarthy era, just a few years before this film was made – another reminder of how different an age it was.)