But flagging slightly in the reviewing:

Goodbye, How are You?

Curious, but not entirely sucessfull. A pseudo-documentary, built around a series of satirical aphorisms (“satirical truths” as the director put it) by Serbian writers. The aphorisms form the basis of a false narrative, delivered deadpan over a variety of strange (sometimes amusing, sometimes merely odd, sometimes apropos, sometimes random) film/video clips. The problem is that in this Internet age, we are all over-exposed to the weird of the world, and it ends up merely seeming like a slightly more sarcastic version of Boing Boing, or a Youtube without the “WTF, thats so obviously faek” comments.

Screened with a quietly devestating shorter documentary in stark black & white, Why I don’t speak Serbian (in Serbian), a series of talking heads about why the Albanian population of Kosovo has comprehensively rejected the use of the Serbian language.

Members of the Funeral

Have I mentioned how much I love Korean film? This is no exception, a strange little drama about three members of a family, all connected in different ways to a boy who may or may not have commited suicide. It’s darkly funny, but also engrossing and unexpected. 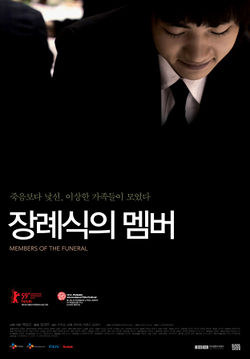 (Here I come across the problem of mixing writing with reviewing – writing says adverbs bad, reviewing needs more than one way to call something a black comedy. Particularly when every single film I’ve seen so far has involved death in some form or other, even if it’s just dead rabbits.)

One thought on “Still watching films…”