I have a horrible feeling that Van Diemen’s Land has effectively ruined me for any other film this festival – my perspective has been thoroughly distorted. For example, Sin Nombre features a sequence in which a young boy has to kill a member of rival gang as part of his initiation, and the victim is subsequently fed to the dogs, and I’m sitting there thinking ‘meh, no biggy’…

I tweeted Sin Nombre as “Pretty, sweet, slight…“, which as the aforementioned sequence suggests is somewhat inaccurate. It’s set in South America, cutting between a girl, Sayra, travelling from Honduras to the US and a young gang member (El Casper to the gang, Willy to his girl) in Mexico until their paths cross and their journeys continue together. The film doesn’t stint on the inherent violence of both gang life and that of the illegal immigrants, nor does it get bogged down in moralising (which was my main concern). 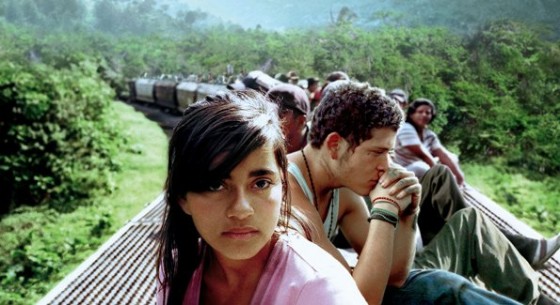 And yet – Well, you could hardly argue against it being pretty – it’s beautifully shot, with some striking images, particularly of the immigrants travelling on the top of a freight train across Mexico. And sweet – the two young leads are sweetly innocent, and the characterisation in general has a gentle charm that bucks against the violence. And that’s partly the problem – the strongest characters aren’t the leads, but the charismatic gang leader and the young boy that the hero recruits into the gang. The gang leader is a complex balance of violence against his enemies and a paternal loyalty to his gang, and it’s unfortunate that the film has to push him too far towards the violence in order to set the story really running.

The boy is fantastic – essentially an observer in the first act, his increasing involvement in the gang is crucial to the story, and the film sends his path in unexpected directions, heading into violence but never forgetting his essential youth. For the most part, it does this with wit, rather than belabouring the issue – there’s a scene with a group of younger boys, all eager to follow his path, that is both funny in itself and ever so slightly devestating. There’s also a nice streak of incompetence in the gang members chasing after Willy as he tries to escape the gang.

With the focus of the film on Sayra and Willy, the script gets a little bogged down in overly pat “You don’t know what you’ve got yourself into” conversations that the leads can’t quite pull off. And towards the end there are a few mis-steps that push the emotion a little too hard. It doesn’t help that Willy is patently doomed from about halfway – the film may be more authentic for it, but it still feels overly sacrificial. I realise that it’s problematic – it’s quite probable that if he’d survived, I would have condemned it as an absurdly cosy ending.

Another first feature, by American director Cary Jôji Fukunaga, Sin Nombre is an impressive debut. If he can resist the more predictable – dare I say American? – routes that I feel this took, he’s another director to look out for. Actually, that’s another aspect – it’s no surprise, despite it being in Spanish, that this is made by a US, and not a South American, director – the problems that I see have that air – it’s not as naive as some US perspectives on this subject, but I’m still not wholly convinced by it. Compare it to say, Sleep Dealer, which is a very different take on the immigration issue – Sin Nombre doesn’t have the inherent anger of that (perhaps less technically accomplished) film, and while it’s not actively condescending, there’s a slightly passive air to the characters.

(I should probably watch it further away from Van Diemen’s Land to see if it holds up better on its own.)

One thought on “Sin Nombre”