Dedicated to the mothers of America, Bloody Mama is a lurid, vividly engrossing and entirely inaccurate portrayal of the exploits of the Barker Gang, one of the many notorious criminal gangs that sprang up in America during the Depression.

Whereas the real Ma Barker was peripheral to the exploits of her sons, the film places her at the very heart of the gang, a devoted mother to her variously psychopathic, drug-addicted and borderline incestuous sons. It’s a strange, extreme film, both funny and shocking, with an amazing central performance from Shelley Winters as Ma Barker. It also features a very young Robert De Niro, twitchy as the drug-addicted Lloyd Barker (Corman has more cinematic connections than Kevin Bacon). 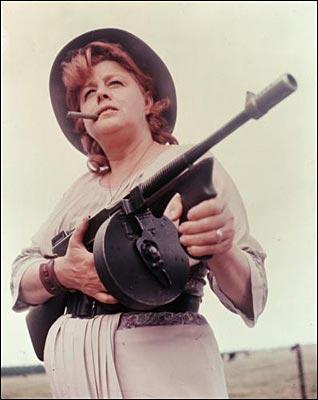 (The film really was dedicated to the mothers of America, both in the publicity and the film itself, with the titles rolling over this 1934 US stamp.)